We have been testing for six decades: Checking of products was connected already with the beginnings of the Czech Egyptology concession. 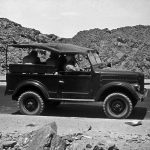 The combination of the climate and the milieu of the excavation of ancient structures has attracted various manufacturers and companies to test their products and technologies since the very beginning of Czechoslovak archaeologists’ work in Egypt. In the pioneering beginnings, the companies that were involved in the testing participated also in providing supplies for the expeditions to Nubia (southern Egypt). Twenty companies were involved in a larger extent in 1961, for example. The testing concerned not only various instruments but also non-perishable food and even beer from the Pilsner Urquell and Staropramen breweries.

In recent years, the teams of our Institute of Egyptology have tested above all a sophisticated air-handling system that enabled the circulation of air during the research of deep shaft graves. Furthermore, members of the expedition checked the functionality of clothing and footwear in the desert conditions, specifically their ability to cope with the sandy environment, the temperature and humidity fluctuations and the physically demanding activities during the research and documentation of burial chambers.

Are you interested in details from the history of Czech research in Egypt and of the checking of products in the desert? Read the article Space for Hope: Czechoslovak Institute of Egyptology Expeditions to Nubia in the 1960s (in Czech).